Aventum Partners acted as an adviser to CapMan and other owners on the sale of Komas to Componenta.

Komas is a manufacturer of machined components, forged blanks, hydraulic pipes and plate cuttings. Key customers of Komas include major international OEMs of machinery and equipment. Komas has a history dating back to 1925 and to state-owned Valtion Kivääritehdas. After that Komas’ forefathers have included among others Valmet and Patria. Komas Oy was established 2002 and in 2012 split into Komas and Fortaco. Today Komas includes four machining units as well as units for plate cutting, forging and hydraulic pipes.  The Company has over 300 employees in Jyväskylä, Härmä, Kurikka, Leppävesi and Sastamala. In 2018 net sales was €45 million and EBITDA €2 million (FAS).

Componenta is a company specialized in supplying cast and machined components to its global customers, who are manufacturers of vehicles, machines and equipment. Componenta Corporation share is listed on Nasdaq Helsinki. The acquisition of Komas expands Componenta’s range of products and services and improves the quality of customer service by creating a one-stop-shop for industries purchasing cast and machined components.

The purchase price of Komas consists of 60 million new shares issued by Componenta, which is approximately 25.3% of issued Componenta shares after the share issue. Using pre-announcement closing price (15 May 2019) of €0.11 the purchase price would be €6.6 million. The final purchase price is determined in accordance with the share price on the closing date.

The closing of the transaction depends on the usual terms of business acquisitions, including any possible approvals from authorities and the decision on the share issue by the Extraordinary General Meeting. It is the intention of the parties to conclude the transaction on 1 July 2019. 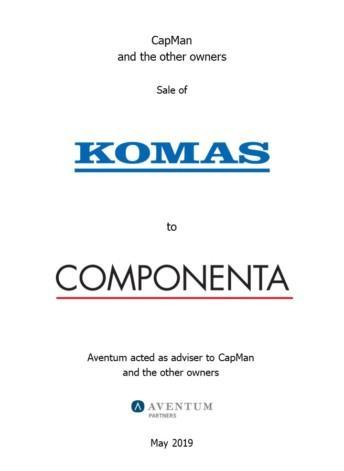